The poor man's Hugh Hefner died Wednesday, Oct. 20th, at a hospital in Plano, Texas. He was 79.

Guccione lost much of his personal fortune on bad investments and risky ventures. Probably his best-known business failure was a $17.5-million investment in the 1979 production of the X-rated film "Caligula." Distributors shunned the film, with its graphic scenes of lesbianism and incest. However, it eventually became General Media's most popular DVD.

His management style even sparked a rift with his own son, Bob Guccione Jr. In 1985, the publisher helped his son launch the music magazine Spin, with Bob Jr. serving as editor and publisher. After just two years, the two clashed over the direction of the magazine and the elder Guccione decided to shut it down, forcing his son to secure outside funding. According to Axl Rose, the younger Guccione was also pissed because his dad got more pussy than him.

The creator of such iconic TV series as Hardcastle & McCormick, The A-Team and Baa Baa Black Sheep (featuring a budding, young actor named John Larroquette) has died at his Pasadena home of complications of melanoma.

He ditched America's sweetheart for America's femme fatale, did lots of drugs and starred in his own TV show called, "Coke Time with Eddie Fisher". But in the end it was his hip that took him out. Complications from hip surgery ended the life of Eddie Fisher at his home in Berkeley on Thursday. He is survived by his four children: Princess Leia, Todd, Joely and Tricia Leigh as well as his six grandchildren.

He appeared in such films as "Freaky Friday", "Patch Adams" and "Killer: A Journal of Murder" starring James Woods and Seth Romatelli

Rich Cronin, believed to be 36

Fan of the show and lead singer of LFO (Lyte Funkie Ones), Rich Cronin, died Wednesday in a Massachusetts hospital. He and his boy group shot to fame and superstardom with their smash hit 'Summer Girls' back in the '90's.

Frank C. Garland, the UC San Diego epidemiologist who, with his brother Cedric, was the first to demonstrate that vitamin D in sunlight plays a role in preventing cancer and other diseases, died Aug. 17 at UCSD Thornton Hospital. He was 60 and had been suffering for nearly a year from cancer.

"His favorite expression was, 'I like observation and inference.' " Dr. Frank Ryan, plastic surgeon to Heidi Montag and other celebrities, was sending a Twitter message about his border collie just before his fatal car accident.

"He lived up in Malibu on a tiny street and he was texting while driving and he accidentally went over the cliff," Charmaine Blake says.

Blake, a celebrity publicist, says Ryan's family was told by investigators that the Tweeting caused the wreck on Monday.

The dog, whose name is Jill – Blake's middle name – was in the car at the time of the crash and survived injuries to the head, eye and paw.

Half of the Shields and Yarnell comedy mime team that came to fame in the 1970s and briefly starred in their own TV variety series, has died. She was 66.

Yarnell, who turned up in Mel Brooks' 1987 comedy "Spaceballs" — she was the robot Dot Matrix, whose voice was supplied by Joan Rivers — owned a dance studio in Sandefjord, Norway, where she taught jazz, tap and ballet.

He was drinking heavily when he moved to the Los Angeles area in 1972. That July, after a day of drinking, he and a man he met at a party went bar-hopping. With his new drinking buddy behind the wheel of Callahan's Volkswagen Beetle, it crashed into a utility pole while traveling at 90 mph.

Marc Abrams, a physician whose epic (and shirtless) daily walks through Silver Lake inspired documentaries, murals and magazine profiles, died Wednesday. He was 58.

His wife, Cindy, found him dead in their backyard hot tub. Police initially determined that it was a suicide, although the official cause of death is pending.

Abrams traversed 20 to 30 miles of pavement each day and wore out four pairs of shoes each year. He walked swiftly — often hunched over a newspaper — slowing only to shout hellos to friends or give medical advice to those who asked for it.

Garland Perry Cochran was born August 2, 1935 in Isola, Mississippi. After his parents divorced, when he was 9, his father placed him at St. Peter's Orphans Home in Memphis. At age 12 he hitchhiked with an uncle to Hobbs, New Mexico and spent 2 years laboring in the oil fields there. 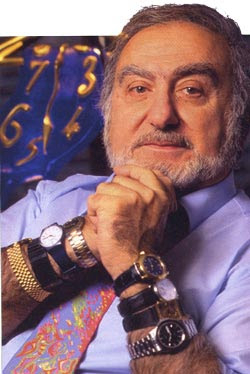 Inventor of the Swatch Watch.

The self-styled Mr. Swatch became a national figure, respected as one of the economic leaders of Switzerland. Back in America, Seth popularized putting the Swatch Watch on his pants next to his zipper.

Not related to Salma.

The country music star and sausage king died at his home while eating in front of the television. Dean was born Aug. 10, 1928, in Olton, Texas, and grew up in Plainview. He and his brother Don were raised on a farm by their mother after their father left when Dean was still a child. They were so poor, he once said, he wore shirts that his mother made out of sugar sacks.

The dropout was co-creator of Trivial Pursuit. In 1980, with an infant son to support and a second child on the way, Haney quit his job at the Gazette to work full time on the game. His personal finances became so shaky, however, that he was redeeming empty beer bottles for cash. He suffered a nervous breakdown.

His youngest child, Diane, leaped to her death from her Hollywood apartment in 1969 at age 20, a suicide the family blamed on LSD use. He and his daughter won a Grammy for their spoken-word recording "We Love You, Call Collect," an emotional father-daughter conversation recorded not long before her death.